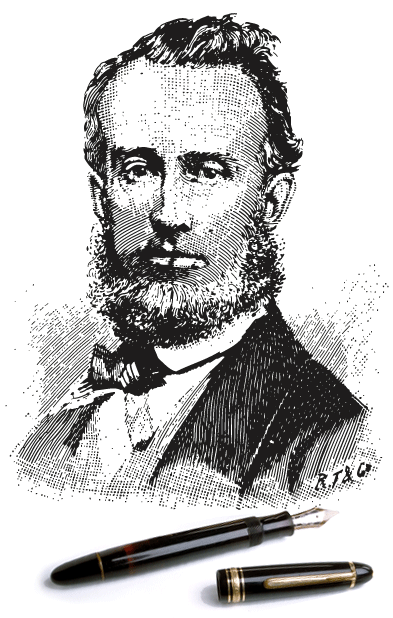 W.B.Rands, (1823-1882), proclaimed “Laureate of the Nursery” by many, was a prolific and versatile writer in several genres. Described by the Illustrated London News, to which he was a regular contributor, as “an acute philosophical essayist, a literary critic, a poet …”, he is mostly remembered now for his many children’s verses and his 2-volume “Chaucer’s England”, but his largest output was probably in the field of essays - some specifically for children. Though many carry that moralistic message characteristic of so much Victorian writing for the young, this was usually applied with a very light touch and his understanding of the child’s mind as revealed in some of his essays was unusually perceptive.

Much of his work has fallen into obscurity for several reasons, but his best-known poems, many of which were re-published in the popular 1899 “Lilliput Lyrics” with fine, humorous illustrations by Charles Robinson, such as “The Pedlar’s Caravan” and “Great, Wide, Beautiful, Wonderful World”, are still known and loved by several generations, especially in the USA. The main reason for his present obscurity is surely the fact that he rarely wrote under his own name but used at least 30 noms-de-plume. In fact, of the ten or twelve books and innumerable articles published during his lifetime, only the slim volume of poems titled “A Chain of Lilies” bears his name; dissatisfied with this work, he pleaded with his friends to forget the book. Much of his literary output consisted of contributions to evanescent periodicals, magazines and annuals, such as “Good Words”, “Good Words for the Young”, “Tom Hood’s Comic Annual” & “Strachan’s Annual”. He contributed articles to the “Spectator”, “Illustrated Times”, “Saturday Journal” and several other journals, now extinct, and wrote literary criticism and topical comment for the “Contemporary Review”. His critical introduction to a volume of the complete poetry of George Eliot has recently come to light.

Born in Chelsea, South London, the son of poor, devout Calvinist parents, he was largely self-educated by reading in second-hand bookshops, though his parents did contrive, by dint of sacrifice, to get him some schooling, frequently interrupted, between the ages of 10 and 13. His father was a candle-maker and later became a dealer in china & glass, while his mother would supplement the household earnings by clipping wicks. Linguistically precocious, he recalled that, at 5, apart from unusual words, his vocabulary was no smaller than it was at 20. Before he started school he had learnt to read Latin and Greek, and knew all the Greek New Testament. His first employment, aged 13, was in a Solicitors’ office, earning 6 shillings a week, and 10 shillings at his second job. He evidently found his main duty, the serving of writs to poor trades people, too upsetting, so he left to take employment as a foreign correspondent in a city merchants office, being now competent in French & Spanish. After several happy years here, he joined, in 1857, the Parliamentary reporting staff of Messrs Gurney engaged in reporting Committee proceedings, and remained until forced by ill-health into retirement in 1875.

His first marriage was to Mary Ditton in 1846, by whom he fathered six children, two of whom died in early childhood. He apparently left Mary around 1858 to live with Hannah Rolls, (daughter of John Rolls, a member of the Curriers Company and of the Court of Aldermen of the City of London), by whom he had five children. He married Hannah after Mary’s death, in 1881. With two families to support and hard-pressed as he was in his parliamentary work, it is amazing that he found time for the research necessary for such works as “Chaucer’s England” and for the reading requirements for his literary reviews. He certainly worked very hard; in fact, both his son, Paul, and his doctor were convinced that he worked himself to death.

There is now a clear need for the collation and correct attribution of his large body of work, much of which was published in journals and periodicals of the time. Although some research will be needed to unearth all his published material, it should be accessible at the British Library.

Click here to order a copy of the Lilliput Lyrics Audio CD. Priced at £5.00 (plus £1 p.&p.). All proceeds go to Save The Children Fund.